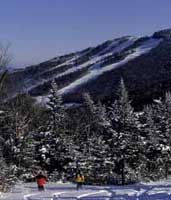 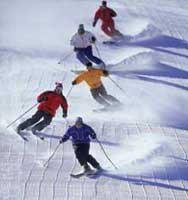 Killington is the largest ski mountain in the Eastern United States, with 7 mountain peaks, six of which are interconnected. The seventh, Pico Mountain, is a short drive away but on the same lift pass.

Killington has fantastic snowmaking facilities and terrain for all grades of skier. Beginners have a very good ski school to use, and excellent if sometimes crowded nursery slopes. Intermediates have plenty of easy cruising, while experts should head for the 'Outer Limits' for reasonable challenges. There are also 'Fusion Zones'- essentially unbashed pistes for more advanced skiers to learn to off-piste. Boarders have lots of options, with 3 half-pipes, 2 parks and a boardercross course. Cross-country skiers will have plenty of territory to cover as well. Childcare is also first-class.

On the down-side, as with all its New England cousins, it can suffer from a lack of natural snow, freezing temperatures and weekend city crowds (it's only 3 hours from Boston). Because of this weekend trade, prices can also be steep and the locals can be slightly unfriendly. The resort is a rather sprawling place, with very little in the way of off-snow pursuits. The piste map and on-piste markings mean some confusing touring as well. That's all the negative stuff done.

There is lively après-ski over the weekend and a reasonable range of eateries (off- mountain are much better than on-mountain). Essentially, Killington is a great resort if the weather conditions are right. It is also far closer for the European market than the Rockies. Despite complaints about weekend crowds, average snow and somewhat poor off-snow activities, Killington is not far short of entering the league of champions…